The couple came up with the campaign, which encourages NHS staff to introduce themselves to patients, when Kate was being treated for a type of sarcoma. Kate passed away in 2016 and Chris has continued to take the campaign across the world in her honour. He runs events for health workers, provides resources and has established International #hellomynameis day on 23 July. Chris maintains the campaign’s strong social media presence and regularly speaks and writes on the importance of providing truly person-centred, compassionate care. Through his work, Chris has raised over £325,000, which he is donating to St Gemma’s Hospice in Leeds who cared for Kate.

As part of the celebrations for the 70th Anniversary of the NHS, volunteers who are making a real difference within the health and care sector are being recognised over seven days by the Prime Minister. Chris was invited to an NHS70 roundtable and official reception at No.10 Downing Street on the 4th July, where he was presented with his certificate by the Prime Minister and was pictured with a #hellomynameis sign.

In a personal letter to Chris, Prime Minister Theresa May said:

“There can be no better tribute to the phenomenal life and work of your wife Dr Kate Granger MBE than the global success of the #HelloMyNameIs campaign. Kate saw the importance of compassionate and personalised care from both sides. Your efforts to continue spreading this simple but revolutionary message is supporting better care, not just in our NHS, but in health services around the world. As we come together as a country in celebration of 70 years of the NHS so many of us hold so dear, I want to thank you for all you have done and continue to do.”

“Sometimes it’s the simplest things that make the biggest impact – and just by saying their name on meeting a patient for the first-time, healthcare professionals can ease what can often be a difficult time for patients.

“The work started by Dr Kate Granger and continued by Chris is an absolute inspiration – a terminally ill cancer patient and her husband who still found the time to make things better for others.

“Encouraging understanding and kindness that truly brings light at what can be the darkest of times, it is fitting that Chris’ continuing endeavours are recognised by the Points of Light award.”

“I am truly honoured to have been presented with this award from the Prime Minister in recognition of the work I do both across the UK and the world which improves people’s lives through the #hellomynameis campaign that my late wife Dr Kate Granger and I founded in 2013.  The campaign is all about compassionate care and how through a simple introduction this can improve communication and overall patient experience. Thank you so much for the recognition but more-so thank you to everyone across the world who work in healthcare and support the campaign everyday.”

Watch Chris’s response to receiving a Points of Light award: 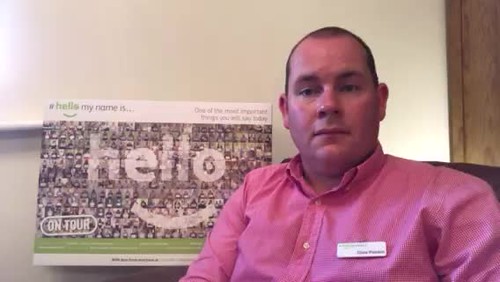 See more about the #hellomynameis campaign